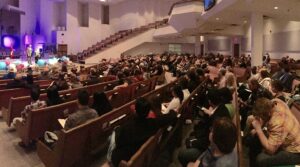 November was one very special month. I do not think Cindy and I have experienced God moving through our ministry this powerfully in a long time. It began on November 6-8 as I had the privilege of ministering in Eureka, California for my friend and soon-to-be new pastor, Jeff Kessenich. I was able to minister to a gathering of local leaders and pastors, a Saturday morning men’s gathering and two Sunday services. God moved powerfully and many lives were greatly impacted for the kingdom.

Upon arriving back home I had a very quick two-day turn around before Cindy and I left for the NAME Canada national marriage conference in Edmonton, Alberta. That Tuesday before we left I was able to visit some of my old friends from National Coalition of Ministries to Men (NCMM) at their national conference in the Golden area near Denver, Colorado. As many of you may remember, I was one of the original leaders who gathered back in the mid nineties to form this outstanding coalition of men’s ministry leaders from throughout North America.

Though this was a month filled with a strong sense of the presence of God, nothing would compare to what we experienced in Canada.

This was the third time we were invited to speak at this strategic national conference in Edmonton. Jack and Simone Winnicky, our dear friends and the directors for NAME Canada were our host and what we experienced there was one of the strongest moves of God in our ministry. There were nearly four hundred in attendance and we were able to see 12-15 people come to a saving knowledge of our Lord. One couple actually asked Jesus into their lives together.

There were also numbers of testimonies of marriages that were ready to dissolve only to see them make renewed commitments to stay together. The atmosphere was electric, the people so needy and the power of God so obviously present. Let me say here that nothing makes you feel so good as to be a part of what God is doing in the lives of others. To know that Cindy and I had some role God allowed us to have in this kind of transformation is so humbling.

One incredible story was from a man and woman who recently moved to Edmonton but were officially separated. It looked like there was no hope as alcohol had been a major contributor to their apparent breakup. The husband told us he was in his car when a radio announcer mentioned a contest whose prize were two free tickets to this very conference. He told us he pulled over to the side of the road, called in, and he won.

Not sure what to do next he decided to call his now estranged wife and—as he put it—give it a shot. Although she was convinced this was over she told us she decided to kick the cat one more time—a Canadian expression I think. Well, they came. Near the end of the conference they approached Cindy and I and told us there story and how God had led them to re-commit to each other. They even stood up to the applause of the audience as we shared their story.

Not sure what to do next he decided to call his now estranged wife and—as he put it—give it a shot. Although she was convinced this was over she told us she decided to kick the cat one more time—a Canadian expression I think

Dear ones this was just one of many such testimonies we had the privilege to hear. On the Sunday following this three-day conference the host church asked me to speak and I shared Cindy’s story and the miracle healing God brought about back in 2010. There was a man in the audience who had just laid his wife of 38 years to rest a few days earlier. At one point in my message I mentioned that many people have asked me if my take-away from the experience would have been any different had our Lord taken Cindy home. My answer is always the same, NO.

Well, apparently that remark really ministered to this man as he emailed me shortly after the service to tell me how much my message meant to him. Another example of how God worked so powerfully through our ministry in Canada.

Now, having shared all of that, I need to tell you that this incredible ministry experience came with a price. I often tell people that ministering from the platform has some unique nuances associated with it. There are times when I have spoken 10-15 times within days with lots of gas left over—and then there are times when I might bring one or two messages and finish an emotional mess. I think I know why this happens. When you speak as often as I do you get a sense for where your audience may be spiritually. The more needy they may be—the more you sense it and tend to run very high on the adrenaline meter.

This was the case here and it took me days to figure out what was wrong with me. When Cindy and I arrived home I was emotional—I was distant and found myself crying for no reason. Yet, at the same time I also felt very fulfilled after what God had just done. We had an invitation to drive to California to be with our daughter Kim’s family for Thanksgiving but I was unsure if I wanted to go. After going back and forth for what seemed like an eternity, we both decided to pack up the dog and head out.

I am so glad we did. From the early moments of the morning we left I began to feel so much better. In fact, I am writing this letter to you from their home here in Temecula and am looking forward to our drive back in just a few days. Needless to say, we had an eventful and spiritually dynamic month. As I conclude let me say just a couple of very important things. First, as we head into December please consider helping us with a generous year-end gift. As you may know, December is the month each year where we rely almost totally on year-end giving.

The good news is that our first quarter of 2016 is beginning to fill up and we are excited about what God is going to bring. And finally, here is an update on the completion of our Men On Target curriculum. We have raised the necessary funds to get about 70% of the project finished. However, we are still in need of some significant major gifts to bring this critical project to the finish line. The good news is that early reports indicate this may be one of the best disciple-making curriculums in our nation today.

Here is a practical way you may be able to help. Consider that we have about 20 sessions left to complete and package. This would represent the last two of the 6-volume set. It takes about $1,000.00 per session to complete the project minus some miscellaneous expenses. Would you prayerfully consider sponsoring one or more of these?

In a couple of weeks Cindy will be sending out our Christmas TargetPoint—let me tell you I have read some of what she has so far and really believe it is going to minister to you—be on the lookout.

Cindy and I want you to know how much we love and appreciate all you do for our ministry.