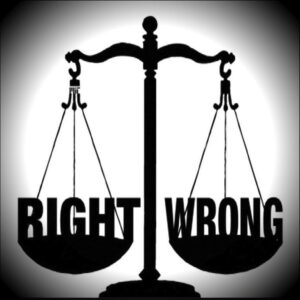 Romans 1:25-32 (NIV)  They exchanged the truth about God for a lie, and worshiped and served created things rather than the Creator—who is forever praised. Amen.

Because of this, God gave them over to shameful lusts. Even their women exchanged natural sexual relations for unnatural ones. In the same way the men also abandoned natural relations with women and were inflamed with lust for one another. Men committed shameful acts with other men, and received in themselves the due penalty for their error.

Psalm 139:16 (NIV) Your eyes saw my unformed body; all the days ordained for me were written in your book before one of them came to be.

Two of the most controversial issues in our time are Abortion and Homosexuality. Let me say up front that I do not need the Bible to understand how wrong affirming either of these is. A basic understanding of human anatomy and common sense will suffice. Having said that, it seems like we have lost most, if not all of our common sense and wish to ignore the clear mandate of scripture. We have chosen to do all of this under the guise of honoring our “rights” and in doing so we have moved the argument from its foundational and core issue in order to confuse.

We have lost most, if not all of our common sense and wish to
ignore the clear mandate of scripture

A woman’s “right” to choose and a gay couples “right” to marry are not now, nor have they ever been, the real issue. The real issue and the central questions we are ignoring have to do with abortion and homosexuality. Both of these are clearly defined and spoken to out of God’s word. So, in order to sell these obvious wrongs as ok we have couched the argument as a human rights issue. The subtle idea here is that if we can claim something is a basic human right then it must also be morally right.

I have no problem understanding how our culture has drifted to this place. Anytime you remove God this is the natural trajectory of mankind.   My problem and challenge comes from the realization that the validation of these ideas affects the very essence of our evangelistic efforts. As these wrongs become more broadly accepted by our culture it is becoming more difficult to draw people toward Jesus.

A thirteen-year-old boy, for instance, who may be struggling with sexual identity or same sex attraction, is now hearing two very powerful voices competing for his attention. The world’s voice, which is inclined toward affirming his human feelings, has now become a more powerful tool of our adversary in drawing this boy in the wrong direction—a direction that will ultimately destroy him.

As I know God loves each and every human being no matter who they are, where they come from or what they believe, how do I show that same kind of love and yet maintain an uncompromising position about the volatile issues we are facing?

Let me share some thoughts that may help. Recently as we were traveling in our family car our grandson Hayden, who was in the back seat, said I am sick and tired of people accusing me of stuff I clearly did. It was meant to be funny and get a response—and it did—we had a good laugh. But, there is something a little more profound that I think needs further examination here. Most who know me understand I had a pretty shady background. My wife, Cindy would at times catch me in something I thought was hidden and when she would confront me I would get very angry. It was kinda like—how dare you accuse me.

As I look back now I can see a correlation between my internal awareness that I was wrong and my level of anger in response. I have a theory—I could be wrong here but follow me please. I believe every human being has within them a sense—a conscience—an awareness that there is a God-made natural order. I am also convinced that most, perhaps not all, people who have bought into a lie that is contrary to that order know it and that this awareness can contribute to some inappropriate anger.

I am persuaded that those who believe that abortion and homosexual behavior is ok—deep within them struggle with their own conclusions. If this is true that could account for some of the intense anger that seems to flow from people who are believing or acting out a lie. A word of caution here—this works both ways. There are some people who are haters and true bigots who also display anger and I might suggest that they too are responding out of a recognition that their hearts are not right. Hatred and bigotry are no more a part of God’s natural order than abortion or homosexual behavior.

So, back to our question—how do I show my love and not compromise my position or beliefs?  Here are some points to consider: